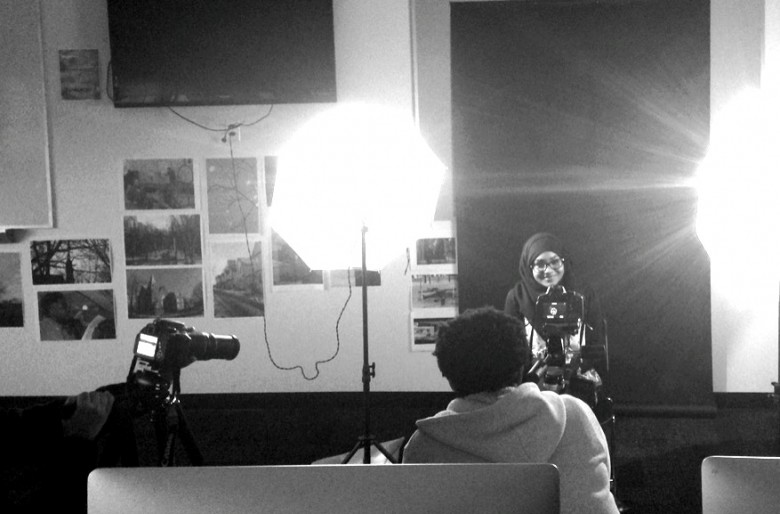 Brianna Mutsindashyaka with her back to the camera, filming a colleague at Buffalo Center for Arts and Technology (BCAT).
- Share this page -

It's Sunday and I plan to meet Brianna Mutsindashyaka at Perks Cafe. Like most aspiring artists, I adore coffee shops. The quainter the better. So Perks felt like the perfect location to meet my interviewee, a local filmmaker with experience well beyond her years, including a documentary known as The Race Project that has landed her a spot at the Seattle International Film Festival.

However, like most aspiring artists, I am a bit scatterbrained and overlook the fact that Perks closes early on this particular day. I wait in front of the closed coffee shop for only a few seconds before Brianna catches my eye, walking comfortably across the street. When she reaches me, I apologetically inform her of my mistake and suggest we walk a few blocks down Main Street towards Starbucks. Brianna responds to this as would an old friend, saying she has never had the opportunity to just walk through downtown. This type of reaction is characteristic of Brianna; she is charismatic in an almost absurdly positive, glass-half-full kind of way.

Perhaps it is this positivity that has led Brianna to film, a field she intends to study at Ithaca College in the fall. Brianna grew up with uncles about a decade older than her, making them teenagers during her early childhood. In other words, Brianna grew up in a house chock full of video games. "One of my earliest memories," she reflects, excited to get to the heart of the story, "is when I was living here in Buffalo... my uncle showed me the Cartoon Network website and I was like 'Oh word, this is amazing!'"

Brianna became enthralled by technology, developing a deep interest in it. Throughout her adolescence, she confesses, she considered a career in mechanics. However, she admits that she has always been an entertainer and was just as fascinated by the thought of being a comedian. Perhaps film is a middle ground between these two arenas. Technology, performing, and creating are not mutually exclusive in Brianna’s eyes.

Having known Brianna through the City Honor's theater department, I was expecting a backstory much closer to the entertainment side. Perhaps she had fallen into it through acting. Or was she enthralled by the scripts we were working with and wanted to get into screenwriting? Was she infatuated with the sets? The lights?

Evidently, none of the above. And it seemed as though Brianna was just as surprised by this revelation as was I. "My love for technology surpasses my love..." she pauses and twists her mouth for a moment, "...no, my like for performing."

"I do like making creative things, being in the arts, all that," Brianna assures me, "but I don't want the pressure to be creative all the time."

Brianna clearly states, as if she has given it a lot of thought, that "the best part was always the creation of the show and the people around me, never actually being on stage." Additionally, she has stage fright! Comically explaining one of the most nerve-wracking experiences of her childhood--a dance recital at the age of eight for which she was seriously under-rehearsed, she recalls, "I didn't realize there'd be a recital. That wasn't part of the deal, you know? I was just dancing." Through her backstage confusion and nerves, however, she recalls the older girls being nothing but reassuring, leading to her final conclusion: "What I like most about the theater community is, well," she chuckles, "the community."

For Brianna, the technical side of films--the editing and the audio, the filming and the directing--are a much better way to tell the story. Which, at the end of the day, is what it's all about for our charismatically positive Brianna, whose top priority in the industry is to make the audience "feel some sort of way."

Brianna is driven by broad but achievable goals. She never wants to make her goals too big, she explains, because every accomplishment should feel significant. She says this matter-of-factly, completely unaware of how ironic it sounds, given all the goals she has outlined for her future, as well as the fact that all of the goals that she has already achieved are remarkably impressive. Equally ironic is that Brianna repeatedly claims that her "one goal" is this, or her "one goal" is that. Among these are some of the most respectable resolutions that I have ever heard, laced in humble, casual vernacular.

With no uncertainty whatsoever, Brianna claims that her goal is "to be so qualified that people are like 'Oh, we have to hire her!' Not everyone can do that, but I want to be one of the people who can." It seems the most important goal to her, however, is the final one she lists: "My one goal," she says dramatically, with confidence, "is to see my name in the credits."

How vague, yet determined. How ongoing and eternal. This made one thing very clear: Brianna is driven in a rare way. She is an unstoppable force.

Brianna Mutsindashyaka - at a Glance

Local filmmaker, Brianna Mutsindashyaka, is headed to Ithaca College to study cinema and photography. A City Honors and Buffalo Center For Arts and Technology grad, she took film classes at both places. She has also worked closely with Buff State's film department. If one thing is clear about this young, driven, local talent, it is that technology, performance, and creativity are hardly mutually exclusive.

Poet and word-enthusiast. Find her exploring her hometown of Buffalo or studying at SUNY Binghamton.
Advertise With Us
- Featured Event -
Sat Dec 5th