Right Now Might Be a Great Time to Jump Into Comics 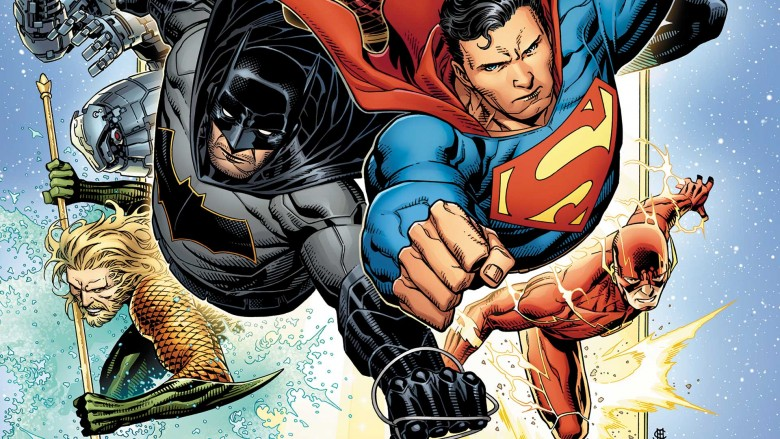 The summer season calls for many things including ice cream, swimming, drive-ins, and summer blockbusters that hit big or flop hard at the box office.

But what many might not know is that when summer rolls around, so do a ton of new comic books. It’s a bit of a tradition in the comic book world to roll out new #1’s when the summer season hits. Young people are getting out of school and the allure of a big #1 on a slick new comic book, paired with breathtaking cover art, almost always generate a spike in sales.

That's exactly what Marvel and DC, the two largest comic book retailers and creators, are hoping for right now and in the upcoming weeks. If you're interested in jumping into the enormous world of comic books after seeing movies like Infinity War or Deadpool 2, now could be a great time to take the leap. Let's look at why:

Just this past Wednesday, more than seven brand new #1’s were released by both Marvel and DC, with books ranging from providing a great starting point for new readers, to creating a fresh continuation of ongoing storylines.

The first book is Doctor Strange #1, written by Mark Waid and drawn by Jesus Saiz. About 80% of this first issue is exposition, which is a clear choice by Waid. It's a form of storytelling that isn't heavily used in comic books because of the ability to storytell through images. Exposition-style writing has a place in comics, as evidenced by it's heavy use in this issue, but this more narrative style may be my least favorite aspect of the book overall. What saves the issue is definitely the beautiful art by Saiz. 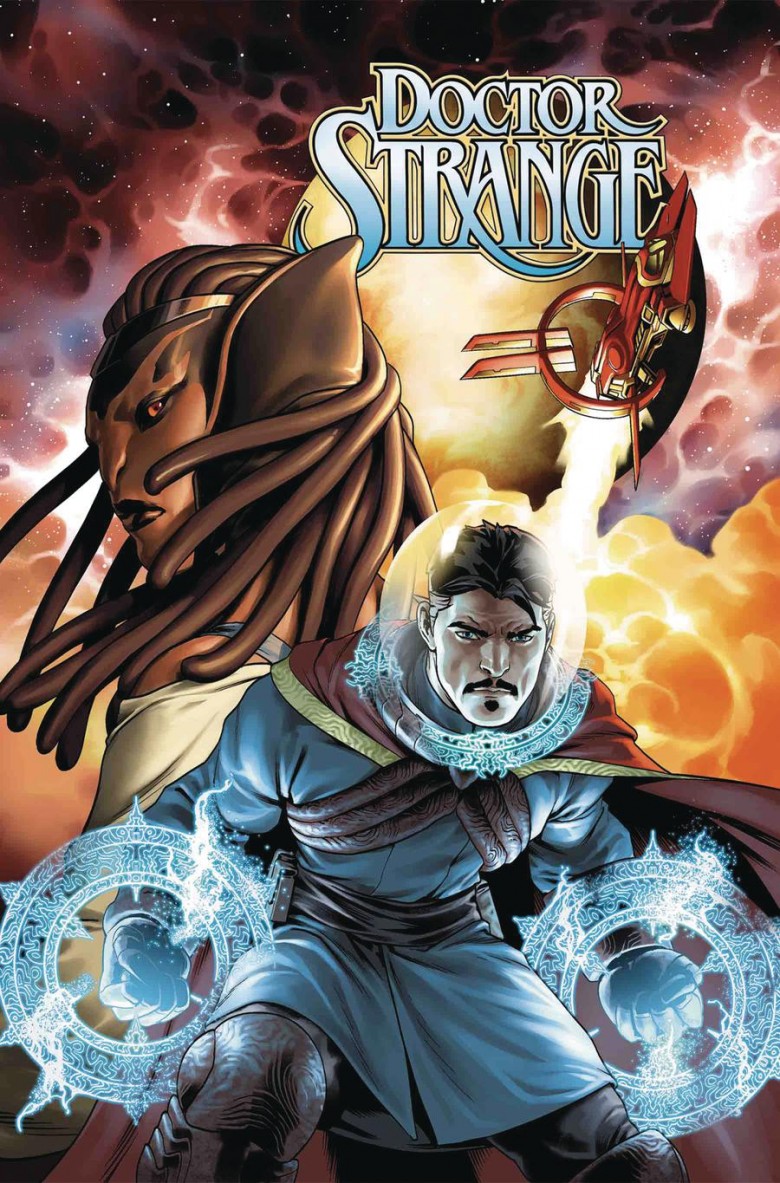 The very realistic style of artwork is different from what we’ve recently seen and what we usually see in a Doctor Strange book. I’m really interested to see how this style will translate the multi-dimensional possibilities that a Doctor Strange book can conjure up. If you're interested in Doctor Strange, this is a good book to start with. There is no heavy mention of any previous continuity which is very beneficial for new readers. My hope is that the storyline in this book, (Strange trying to re-find magic in the world) isn't a retread of a story wonderfully told by Jason Aaron just a few years ago.

If the Deadpool 2 movie is why you might be jumping into comics, then you're going to love this first issue of Deadpool’s newest run. Written by Skottie Young and drawn by Nic Klein and Scott Hepburn, Deadpool #1 takes everything people loved about the two record-breaking films and adds on some of the OG comic book flourish to create a great new addition to the Deadpool world. 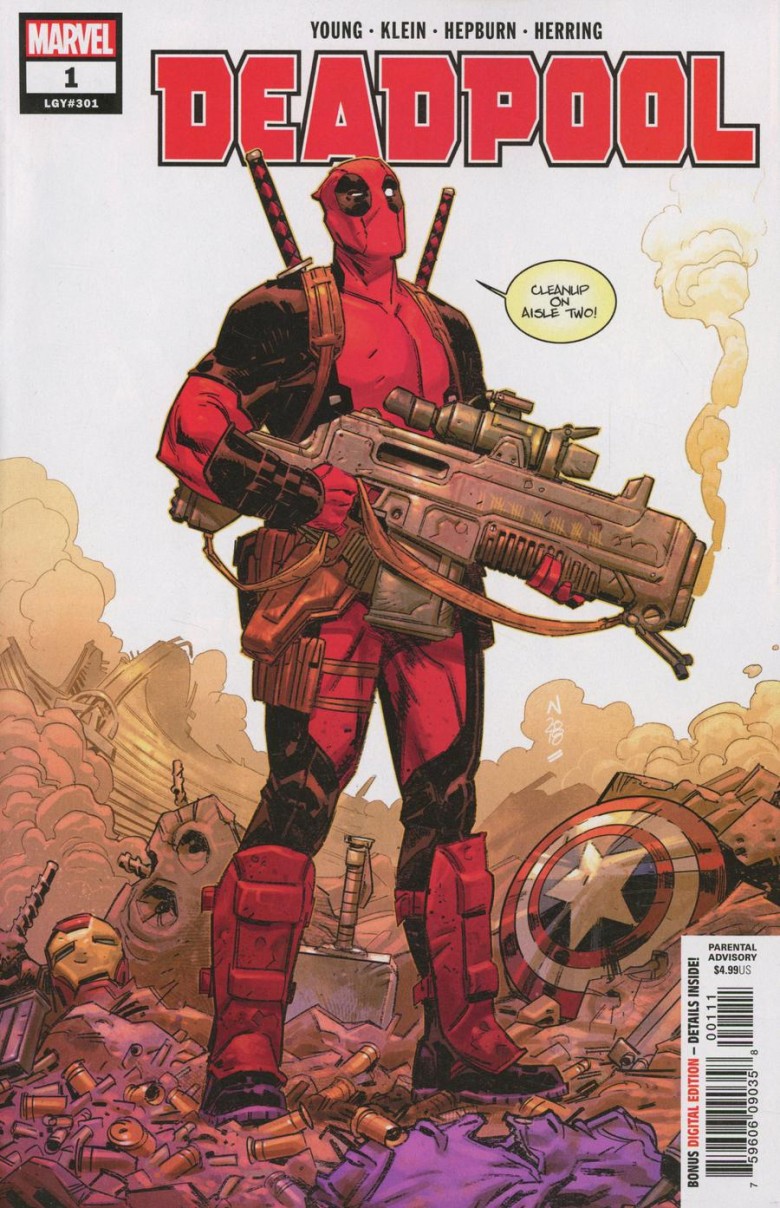 Now, whenever I read any Deadpool book, I subconsciously read the merc’s lines in a bad impression of Ryan Reynolds--he’s done such a good job with the character that I’m guessing that everyone is reading Deadpool as Ryan Reynolds. This issue can be a great jumping on point for new Deadpool readers because DP himself tells you it is. Deadpool breaks the fourth wall and talks directly to you like he’s done since his comical turn in the '80s. He tells you outright that you don't have to worry about previous continuity and to enjoy the ride. There’s even a few pages where he retells his own origin story. This is a wonderfully well-written and -drawn book for new and old readers.

This book is a bit different from the two previous Marvel books, not because of quality, but due to the difficulty for new readers to understand this book's importance in the comics world. Written by one of my favorite writers, Scott Snyder and drawn by Jim Cheung, Justice League #1 emerges off the back of two big storylines that have been going on in DC comics the past few months. To really understand and enjoy this book I think readers should go back and read Snyder’s Dark Knights: Metal and the four-issue run of Justice League: No Justice , which are also both heavy in continuity. I think Snyder does a great job starting a story about characters we all know and love, but it might be difficult for new readers to jump straight into this book without knowing what went on previously in this new run of Justice League. 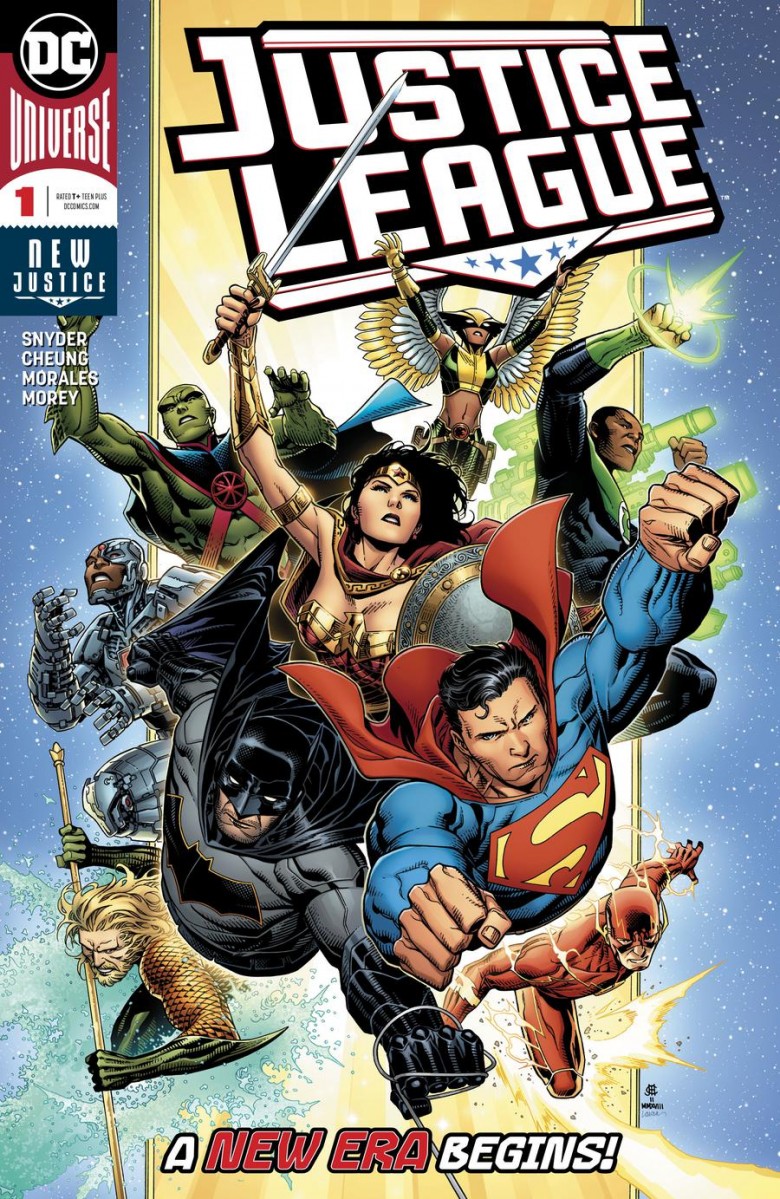 This is only the first issue, so I’m optimistic that Snyder can continue to integrate some exposition to explain to new readers about why things are happening, especially since this comic will be a flagship book for DC comics. With that said, I think the book is an amazing start for the Justice League after it floundered under a different creative team. Cheung’s art is perfect for the grand stage that the Justice League is, providing a realistic approach to each character and exhuming the gravitas that the League deserves. I also really enjoyed Snyder’s decision to put Martian Manhunter at the forefront, giving him leadership of the League, something that comic readers haven't seen in a long time. Changes can sometimes be scary for the older comic readers, but it’s a fresh take for a fresh start on DC’s flagship team, the Justice League.

Hmm, I wonder if there’s a movie coming out soon about Ant-Man and The Wasp? Hmm, I wonder if this book is a cash grab because there's a big MCU film coming out? Hmm. Yeah, there is a new MCU movie coming out and yeah, it’s Ant-Man and The Wasp. I joke because, when the MCU started in 2008 with Iron Man, Marvel starting doing this thing where they created and released a brand new book to bank on film recognition in the hope of increasing sales. They did this back when Captain America: Civil War came out and they released the comic Civil War 2 , which was a huge failure in the eyes of most comic fans. This cycle has been a gripe for many fans and has resulted in a series of unsuccessful books. But, something's different about this book and I think it might just be the wonderful creative team behind it. 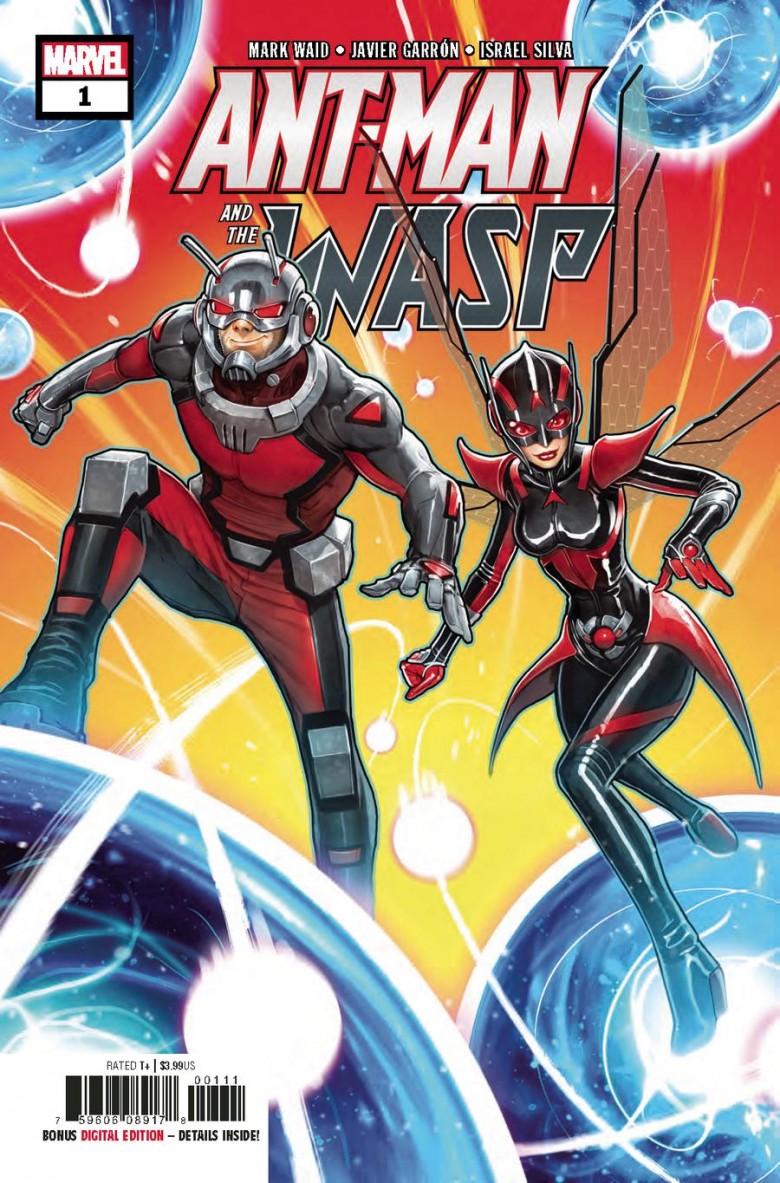 Ant-Man and the Wasp #1 is written by Mark Waid and drawn by Javier Carron, a creative duo perfect for a book like this. It stars very different Ant-Man and Wasp than what will show up if you Google the two characters. Scott Lang, the Paul Rudd Ant-Man, and Nadia Pym, the original Ant-Man’s daughter, team up in a colorful and funny take on the team up. Displaced from other stories and rid of pesky continuity, this book is smart and witty and can even be great for kids. This is definitely a book that new readers can jump right into and is a very good supplement for someone who goes to the see the upcoming film and is looking to read a comic afterwards. Even if you don't enjoy the story, the gorgeous art will make up for it. Carron’s art is absolutely some of the best in the industry.

While most of the new #1’s are both really exceptional and great options for new readers, Immortal Hulk #1 might only fit into the second category. Written by Al Ewing and drawn by Joe Bennett, Bruce Banner Hulk is back from the dead and has a much more aggressive nature. This first issue starts off much like every other Hulk story: deep in the desert of either Arizona or Nevada, (it's always either Arizona or Nevada) Bruce is shot and supposedly killed after a gas station robbery goes sideways. This book isn't bad, but the Hulk is a limited character that can only really be written in a few different ways, and although I was really hoping for a fresh take on the character this time, it's just more of the same. If you're a fan of the Hulk, this book will take you back to basics. But as a longtime fan of legendary Hulk stories like World War Hulk and Planet Hulk , I was disappointed in this start for the big green mean machine. 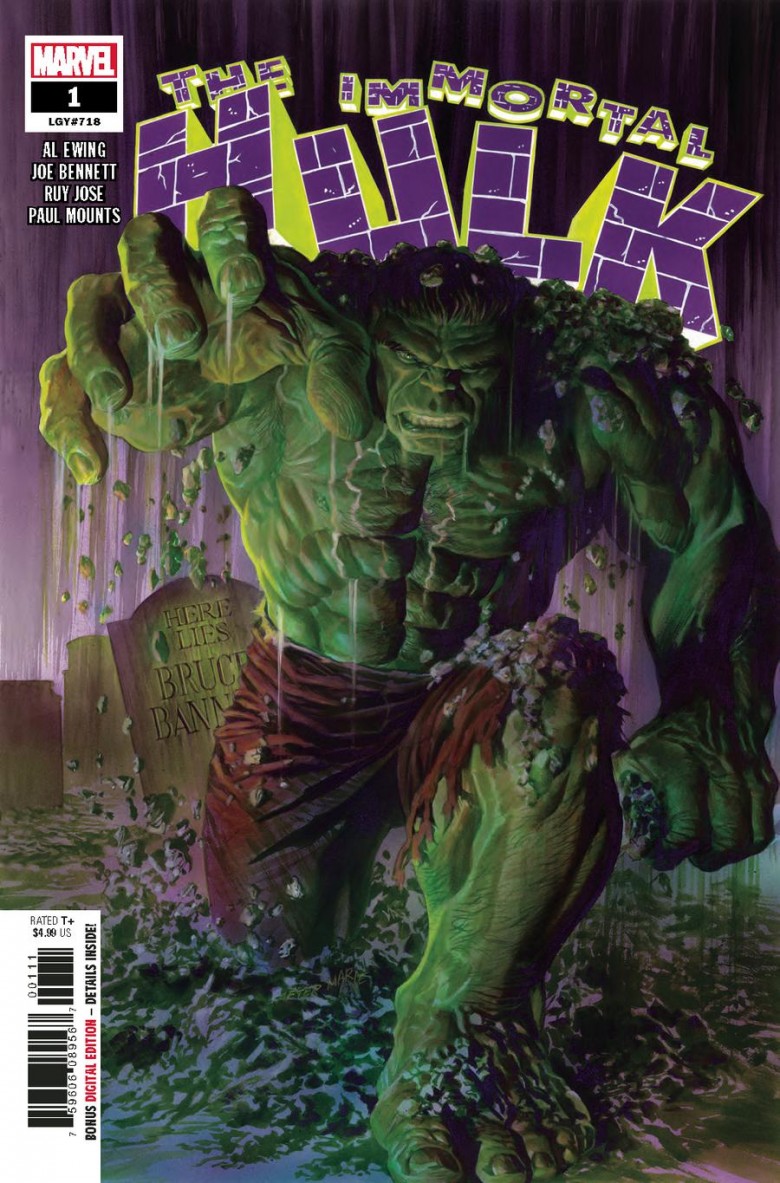 Here are two newly-released books (within the last two weeks) with a planned weekly book release going forward. Man of Steel #1 and #2 mark DC comics' reappearance of legendary comic writer Brian Michael Bendis after his long run as one of the head writers at Marvel. Drawn by Ivan Reis, Man of Steel #1 and #2 take Superman back to his journalistic roots and places Clark Kent back at the Daily Planet. Superman faces off against a new enemy, Rogol Zaar, who had a major hand in the destruction of Superman’s home planet, Krypton. 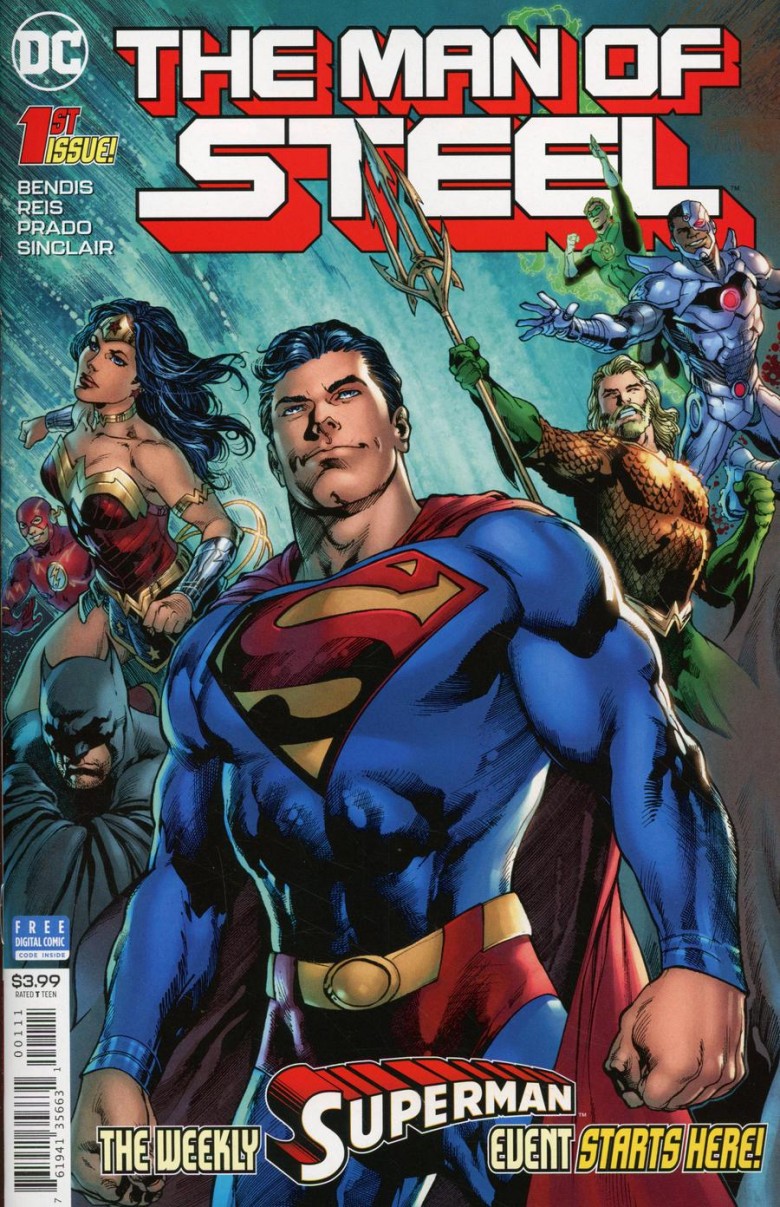 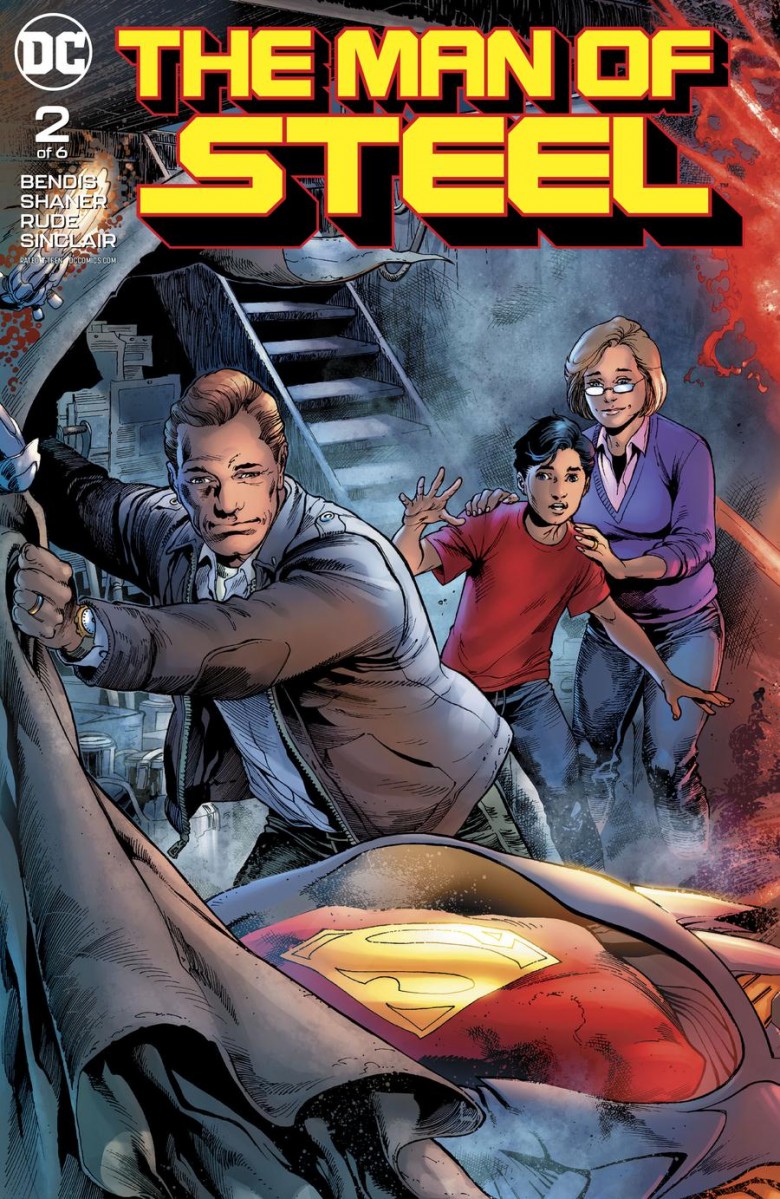 These books are quintessential Bendis, who is known for his long winded speech bubbles that cover the entire page. And now, with Supes back at the Planet, there's a lot of room for Bendis to fill the page with writing, which has been a negative for me in his past books. I’m also not a huge fan of when Clark Kent at the Planet is heavily used in a Superman book as it tends to get a bit monotonous, taking away from the good ‘ol Smallville aspect of the story. The previous run written by Peter J. Tomasi used this aspect wonderfully, focusing on Clark’s family and really nailing the Superboy character. This new run still has time to grow on me especially considering that Bendis has written some of my favorite books over the past few years. I trust that Bendis can make the Planet interesting and can continue to create interesting stories about the original superhero, Superman. This book is great for new readers, once again not worrying too much about previous continuity and starting off fresh with the Man of Steel.

With all these new #1's already out, there are many options for new readers to jump on in, but that's not all. Over the next two months, six more #1 issues are scheduled to be released by Marvel and DC: Hawkman #1, Plastic Man #1, Thor #1, Tony Stark: IronMan #1, The Sentry #1, and Captain America #1. So make sure to visit your local comic book shop and pick up all these great new issues.