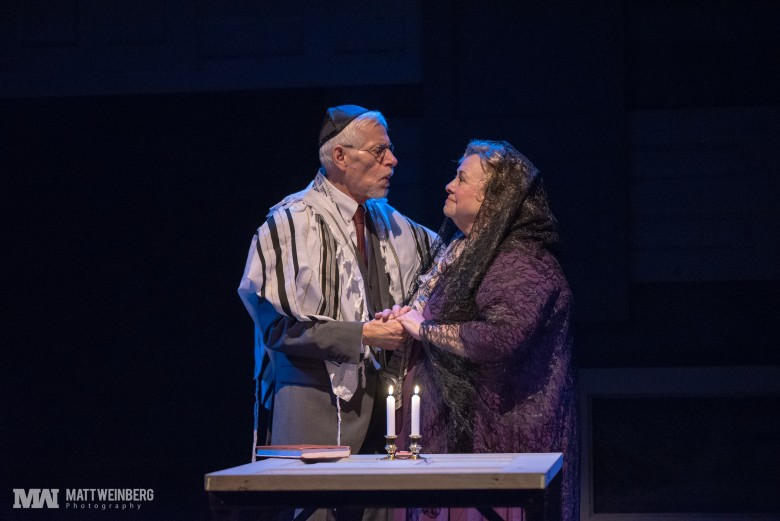 Tucked into a corner of the Jewish Community Center a few minutes from downtown Buffalo is a theater company joining Buffalo’s stuffed and loaded theater scene. A world premiere of a delicious play by Shirl Soloman, The Strudel Lady, hits every mark, delights, entertains, and kindles memories of rigid culture changed by love and the forces of time.

An exciting Opening Night was well carried on the backs of a group of Buffalo’s finest actors: Lisa Ludwig, Tom Makar, Mary Kate O’Connell and David Marciniak. Directed by the legendary Saul Elkin, this group could read the proverbial phone book and make people stand up and listen.

The musical play is a traditional story of loss and redemption, steeped in the traditions of the different levels of Jewish tradition, including Reform, Conservative and Orthodox Judaism. The theme is universal. In religious life, the power of men and the chains of the past sometimes hold back the freedom of the future.

Starting small with a keyboard player on the stage (wonderfully played throughout the performance by Musical Director Joe Isgar) are a few boxes and chairs and simple, perfect lighting. This minimalist stage is filled over the course of two acts by a story of redemption and courage. The simple design allows these wonderful actors to engagingly move and dance and sing with one another, revealing an astonishing chemistry. It's an ensemble of professionals at the top of their game. Kudos to director Saul Elkin!

We begin with Faiga talking to Velvel, and the connection of this old married couple is immediately apparent. Tom Makar is transformed in this role. When his Velvel sings Jewish prayer songs and breaks into opera, it is perfect and beautiful. He and Faiga (O’Connell) are such a believable match. Chava (Ludwig) enters the scene frightened and broken. Faiga is instantly wise and caring, as well as smart about business, as she discovers Chava’s incredible talent for strudel-making.

The Strudel Lady is about perseverance and the strength found in community. Ludwig gives an amazing performance, as Chava evolves from destitute divorcée into a powerful business woman who embraces a life rich in culture and love. That love is Leonard, the multi-talented Marciniak, whose recent return to the Buffalo theatre scene is a gift to Western New York.

Alone, each character performs beautifully, but the duets and group singing are where this cast shines. With nine songs driving the story, the opening of Act 2 with “To Be A Woman Free” is a joyous moment when the entire cast erupts into song and dance. For all the personal tragedy, this play is funny and sweet. And, as my companion Agnes Sullivan Cox remarked, “Wonderful, very inspirational.” Yes, and some tears.

This is a beautifully resolved play. The last act is a small mis-step in its double trickery, but this is a minor complaint, easily fixed. Congratulations, Jewish Repertory Theater! The season is off to a rousing start!

See The Studel Lady at the Jewish Repertory Theater on Thursdays, Saturdays and Sundays through October 28.