Review: An Act Of God 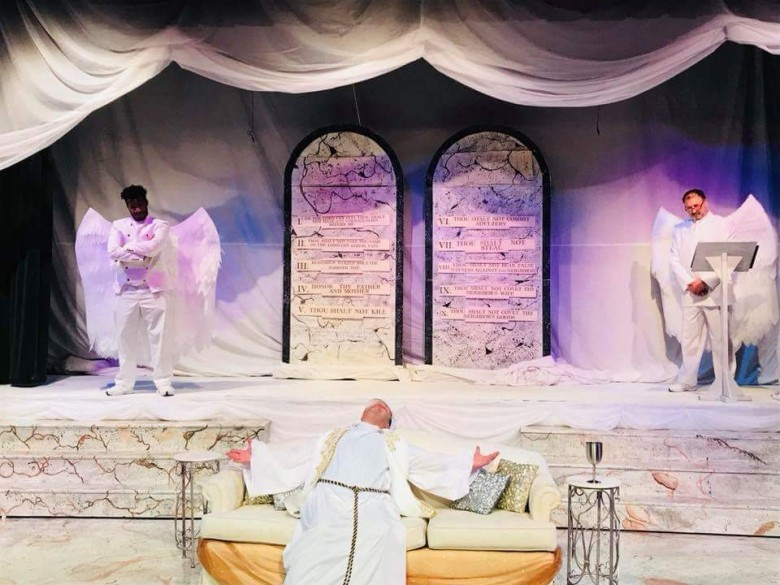 Been wondering what God’s up to these days? What’s on His mind? How He thinks things have gone since He created heaven and earth? You know, with the plagues and wars and floods and all that He has unleashed on us over the centuries. If He’s pleased with Himself and with us? Well, those questions and more will be answered for you when you hightail it to O’Connell & Company to see An Act of God, a blessedly irreverent comedy by David Javerbaum, a former writer for The Daily Show.

God comes to us in Buffalo the form of Joey Bucheker, a local actor and regular kind of guy with a cherubic face who God decided to embody here in Buffalo for the purpose of updating us on His current thoughts and feelings, particularly regarding the Ten Commandments, which He calls “a one-list wonder.” They serve as the basis for Him to expound on all sorts of doings, ancient and current, and to express His bemusement at human attempts to understand Him and the Bible, along with their attempts to make scripture fit into their beliefs and desires. He has the Angel Gabriel (Dan Morris) as backup to read passages from the Bible, a Gutenberg no less, and Michael the Archangel (Jake Hayes) to facilitate audience questions.

Joey Bucheker does the heavy lifting as God, with an almost constant monologue, riffing on one topic and segueing into another as the spirit (ha!) moves him. His spot-on facial expressions and body language convey as much as his words. He simpers and grins and struts, throws tantrums and jeweled pillows, and stretches himself out on the celestial couch like the cat who just ate the canary. He bemoans that for millennia, “I was God but I wasn’t Godding,” and after a particularly angry outburst at the unfortunate Archangel Michael, “I have wrath management issues.” He sits Buddha-like and questions his choices. And then grins again. So well played!

Director Victoria Perez Maggiolo keeps this 90-minute gem moving quickly, yet allows for nuance from Mr. Bucheker, so that we get to see God in all his glorious and inglorious permutations.

In support of God, Jake Hayes is charming and sweet as Michael, who tries very hard to have God answer some of the more difficult moral, ethical, and philosophical questions that trouble humanity. He pays for this, of course. Dan Morris as Gabriel takes his role as Reader of the Word very seriously, standing at the upstage lectern, reading passages in a sonorous, Sunday preacher tone.

Set, Lighting, and Sound by Matt Myers, David Guagliano, and Dewel Perez meld together well to create some fun special effects on the celestial stage.

An Act Of God is very funny and very light-hearted, while at the same time questioning the principles and efficacy of what God labels, “the whole bureaucracy we call religion.” Funny, interesting, and a bit of a scamp. That’s God for you. Who knew?

An Act of God